“Inside some of us is a thin person struggling to get out, but they can usually be sedated with a few pieces of chocolate cake.”  ~Author Unknown

“When I buy cookies I eat just four and throw the rest away.  But first I spray them with Raid so I won’t dig them out of the garbage later.  Be careful, though, because that Raid really doesn’t taste that bad.”  ~Janette Barber

BACKSTORY:  Kristi, my BFF, has always been the one to really spearhead all the reunion hoopla in the past.  The 10th reunion, she pretty much single-handedly organized–to her own great personal expense and frustration.  But it turned out to be a super fun weekend.  I think everyone had a great time and so all the toil was worth it in the end.  Everyone wanted to “do something” for our 15th (2002).  It rolled around and there she was again.  Kristi.  Trying to put something together.  You know, everybody’s all gung-ho on having a reunion, but no one wants to plan it.  Kristi, myself, our spouses and two other classmates met at the homecoming 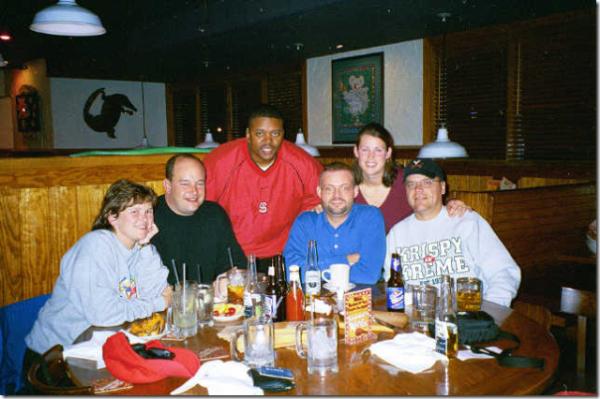 game at our alma mater and then went to get a bite to eat after.  It was a lot of fun.  Too bad for the ones who missed it.  Here is a pic of those of us who didn’t miss it.

CUT TO NOW:  2007…late 2007.  And talk has been swirling around for months about our 20th reunion.  Nothing has materialized.  Until…you guessed it.  Kristi.  The dependable Class of ’87 treasurer (or was it secretary?? or both?) comes to the rescue.  She sent out a quick email early this week as a last ditch effort to do SOMETHING (dinner at a local restaurant–this weekend) to acknowledge our being 20 years older than we were in 1987.  Kristi still lives in the area where we went to school and so she sees some of our classmates (or at least hears about them–gotta love small town gossip) from time to time.  Heck, she even teaches some of their children!  Dang, we’re getting old.  So she has been communicating with some of the classmates who are still local.

She and I have been talking a lot this week. “Have you heard from so-and-so?”  “Oh, so-and-so’s a no”  “Aw man, I was really hoping to see him/her”…etc.  She talked to one of our classmates this week and she was making excuses about why she couldn’t come.  Lots of excuses, but then the nameless classmate says, “Well the real reason I don’t want to come is that I’m too fat and I don’t want everyone to see my fatness.” (Which struck me as hilarious that she would break down and confess that THAT was the reason.  Although I imagine it is THE main reason many people avoid their reunions.)  Kristi encouraged her to come anyway, that we did not mind her fatness.  When Kristi told me this, I said, “Did you tell her that WE were fat too??”  (I can use the word FAT because I’m not using it to refer to anyone else but Kristi and me.)  Kristi said that “nameless classmate” had probably put on about what the rest of us had, and she had a couple of kids, and well, you know what that can do to a body.  Why, YES, yes I do know what that can do to a body.  It is permanently and irreversibly changed –FOREVER.

DISCLAIMER:  Now, let me say, before anybody gets all offended…I realize that a person’s weight is a VERY sensitive and serious subject.  You are preaching to the choir here.  I’m not trying to make light of that issue or make fun of people–only how the classmate herself made reference to the subject.  I know a lot of people who struggle tremendously with this and being a (currently AWOL) Lifetime member of Weight Watchers myself and having worked for WW as well, I know, and have worked with a lot of people fighting the weight battle.  I have dealt with my weight all my life and at times have had the motivation to do something about it.  Currently, the motivation is quite lacking and I’m wondering what I’m going to wear to this impromptu function since I’m dealing with the fatness my own self and most of my clothes seriously don’t fit.  And 5 days is not enough time to rid myself of 20 pounds…unless I was at the Biggest Loser Ranch, but oh well.

But here’s my point….I mean, seriously, are you going to let THE FATNESS keep you from seeing old friends.  From cracking up.  Reminiscing about our days at NPHS??  Is that, in fact, the “real” reason?  We all have our insecurities.  We ALL were dorks/had bad hair/were overweight/had braces/were uncomfortable with our bodies/had bad skin/had crushes on people who didn’t crush back/made mistakes/said or did things we wish we could take back when we were in high school and sometimes bringing all that back up doesn’t feel good.  And I realize that high school was NOT the “best of times” for everyone, but come on, don’t let the fatness get you down.  Come party with the rest of us–fatness and all. 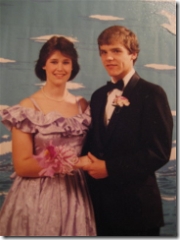 Filed under Back in the Day, Friends, Humor

Tagged as back in the day, friends, Humor, reunion