Jacob got a big kick out of the local weatherman this morning when he stated that we should all be aware of possible tornadic conditions in our area today.

“Tornadic? Is that really a word?” My word-fascinated son wanted to know. And he then went on to repeat it about three or four times in a row. I told him it sounded legit to me. He chuckled.

SIDEBAR: He has always been fascinated by words and the sound of them. How they rolled off his tongue. I remember once when he was about 4 or 5 years old, I said the word “hippopotamus” and he began to laugh hysterically and repeat the word over and over. I asked him what was so funny and he told me that hippopotamus was a funny word. I couldn’t disagree, really. He had a point.

But back to the weatherman: he was not just kidding around this morning. And we are not really used to such tornadic conditions down here in South Cackalacky—at least not this time of year. Now, we can get down with a hurricane, but tornados? Not so much.

The wind has really been whipping around out there today. Gusts of 40+ mile per hour winds. We proceeded to secure the trampoline this afternoon. I didn’t want a repeat of our last trampoline incident which occurred in Iowa back in April 2007.

In case you are not aware, Iowa City, our former home for 4 years, lies smack in the middle of what is called Tornado Alley. One April evening, I left my dear family at home while I ran up to our local Mom and Pop grocery store to pick up a few things. As I was shopping around inside, I began to hear rumblings from other customers (as well as rumblings of storming on the roof) about a tornado in the area. The next thing I knew, my groceries and I, and about 15 other people and their groceries, had been corralled up in the big walk-in chiller in the back of the store. (I grabbed a People magazine on the way back. I had no idea how long I would be there. I mean, a girl needs to be prepared!) I called my family to make sure they had gone to the neighbor’s basement, since we did not have one. They had. So all there was left to do was wait.  And make a friend!

And wait we did. I can’t really recall how long we waited but I think it was in the neighborhood of an hour. Meanwhile, a tornado had touched down in the parking lot of the grocery store.

When the grocery store staff decided it was safe for us to leave, I checked out and made my way home. As I pulled up in the driveway, I noticed that one of our trees in the front yard was down and uprooted. Fortunately, it had chosen to fall away from the house. I unloaded my groceries, called the family and they came home.

Some time later that evening I walked to the back of the house and looked out the sliding glass doors. As I went to walk away, I did a double-take. (Think cartoonish and you will be right.)

“Where is the TRAMPOLINE!!” I said out loud to no one.

It was dark by now and I could not see where the trampoline was—except to know that it was not where I had left it when I went to the store. You could imagine my surprise.

So I enlisted the help of the Hub and the kids and we wandered out in the back yard. There were some other neighbors out and about as well who also helped look. Crazy to think we had to look for a trampoline, right? One would think this would not be a difficult item to find.

Well, we found it.

Mangled and enmeshed in the backyard chain link fence of a neighbor several houses away.

I am not exaggerating. Sadly, we took no pictures, but trust me when I say that we had to extract it piece-meal from the fence of these folks. Thank God they had a fence. Otherwise our trampoline would have landed smack dab in the middle of their living room! Can you say “lawsuit??” YIKES.

Let’s just say that we have learned to err on the side of caution when it comes to tying down the tramp, mmkay? Thankfully, the kids indulged me and were very helpful, as the the Hub was not home yet. Though after it was all said and done, Emma did say, “Do you feel better now, Mom?”

Yes. Yes I do. Thankyaverramuch!

“There are two big forces at work, external and internal. We have very little control over external forces such as tornadoes, earthquakes, floods, disasters, illness and pain. What really matters is the internal force. How do I respond to those disasters? Over that I have complete control.” ~Leo F. Buscaglia

The Tyranny of the Urgent

How did the day get away from me?

Going for a walk.

Only slightly taming the laundry beast.

Encouraging a couple of friends and talking to my Dad.

Half-watching the Presidential Inaugural festivities, which basically ended up as noise in the background of my day.

The tyranny of the urgent.

It takes you over sometimes.

This is how I have felt lately.

Overrun by one thing after another and feeling absolutely ZERO sense of accomplishment.

Always running to catch up.

Rushing from one thing to the next.

Just getting in under the wire.

I look up and see the next wave rolling in.

Each day I pray that God will direct me to what is important and help me to fix my eyes on Him.

That the tyranny of the urgent will not overshadow the peace and rest and joy of the eternal.

Some days I do better than others.

How was your day?

It is a chilly, gray and drizzly start to Thanksgiving week here in South Carolina.

And as I look out the window, I find myself remembering when we lived in Iowa and it seemed that every day from November through March was a freezing, gray and windy day…often snowy. And though I do love my Iowa Peeps, I am thankful that chilly, gray and drizzly are not the norm for my current digs! 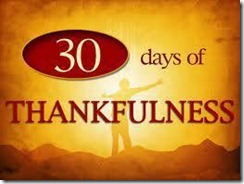 I have begun to reflect a bit on the coming week and what it means to me and my family. In this month of November, many of us, myself included, tend to really think about the things that we are thankful for…obviously the holiday is the impetus for that. But this year, more than any other, it seems, I keep asking myself why I don’t live in this state of gratitude the entire year. Every minute. Every day.

Don’t get me wrong, I am certainly not ungrateful every other month of the year. I consider myself a pretty grateful person. I do think about the blessings in my life and am truly humbled by how incredibly blessed I am.

But am I walking around with an attitude of thanksgiving in the every day things? Every. single. day?

I don’t think so.

I find myself grumbling at the mountain of laundry.

I worry about our finances.

I silently curse all the dishes as I load the dishwasher.

I sigh about having to schlep the kids all over everywhere.

Where is the thanks?

Thank God I have a family who needs their clothes washed and a washing machine and dryer that still work after 20 years.

Thank God we have enough money to meet our monthly expenses.

Thank God I have a family to feed and enough food to feed them.

Thank God my children  are able to get out and do things they enjoy. Thank God we have a vehicle in order to schlep them!

In everything, give thanks.

Filed under 30 Days of Thankfulness, Lessons