I realize that I am on a string of serious posts here.  Sorry if that is bumming anybody out, but it just seems like there have been some heavy things happening in my part of the world of late! Just in case you were wondering, my funny bone does, in fact, still exist.

I have already mentioned in an earlier post this month that it is Autism Awareness Month. 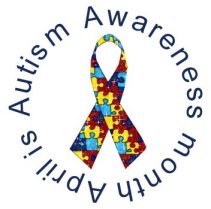 Autism doesn’t just occupy one month of the year at our house.  It is 12 months, 365 days, 24/7. However, I am glad that there is a month that recognizes families who are dealing with autism and honors the need to spread knowledge so that people who are in the dark can get informed. I am also thrilled to see the exposure that people like current American Idol contestant, James Durbin, and Zev Glassenberg from Amazing Race: Unfinished Business are receiving and bringing to the world of autism, specifically Asperger’s Syndrome. It should be noted that James Durbin deals with Tourette’s, in addition to Asperger’s.  It seems like almost every day I am hearing of someone…in the public eye or not…who has been identified as somewhere on the autism spectrum.

Fortunately, due to the wider exposure that some of these folks are getting, the information is getting out there.  People are being informed about autism and its many faces.

Autism has many faces.  Next time you are out and about, look around…in Wal-Mart or the checkout at the grocery store, at the movie theater, in your neighborhood, at your kids’ schools, at church, the soccer field, the bank, the post office.  The face of autism is everywhere.  Considering that 1 in 110 children in the US have an autism spectrum disorder (ASD), everyone knows someone who is affected.  Everyone.

Autism is no respecter of persons. ASDs cross all gender, racial and ethnic lines.  ASDs don’t care if you are a millionaire in Malibu or if you are homeless in the streets of New York.  People in all walks of life are affected.

People are affected in varying degrees, thus the term autism spectrum.  At one end, there are individuals who are very high functioning, who may seem “quirky”.  At the other end are individuals who have no speech and have difficulty with every day tasks.  And then there is everyone in between. No two individuals are exactly alike, though they may follow very similar patterns of behavior.

Take a moment before you pass judgment on that mom who isn’t “disciplining her child”. Ask your children to be kind to the kids at school who they know have special needs or to the ones who just seem a little different.  And never, never allow the word retard to be used. Ever.  It is a horrible word.

Children and adults on the autism spectrum all want and need the same things that every other person wants and needs: to feel loved, to have friends, to be respected and treated with compassion, to feel successful.

They are more like you than they are different.

I know a young man who is hilariously funny. He is so smart that it blows me away sometimes. He is awesome on the Ripstik and could do flips around you on the trampoline.  He loves science. He plays the French horn.  He holds a black belt in Tae Kwon Do and a driver’s permit.  He loves all kinds of birds, especially birds of prey. He is kind and polite and compassionate. He likes to play golf with his dad. He is sometimes mischievous and like most teenage boys, enjoys aggravating his sister and playing Wii. He also hates cleaning his room and getting up in the mornings.

He is one of the faces of autism.

And he is amazing.

"Recognizing and respecting differences in others, and treating everyone like you want them to treat you, will help make our world a better place for everyone. Care… be your best. You don’t have to be handicapped to be different. Everyone is different!" ~ Kim Peek, inspiration for Rain Main.