Who can sing with me the praises of some comfort food?

Methinks I hear angelic voices singing the Hallelujah Chorus in the distance.

Yes, my friends, I do love me some comfort food. Now, this means different things to different people, no doubt. And this time of year, with the cooler weather and the holidays approaching, my comfort food yearnings kick into high gear!

Soups. Stews. Goodies that are warm and creamy. And, of course, terribly fattening. Oy.

It is not just about the food, though. It is the association of the food with family memories and the love and comfort of family and the standing together in the kitchen, working together to prepare a meal.

It is how my mother-in-law shows her love. No matter how many family members will be coming in for a weekend or a holiday, she will make each one his favorite. For me, she makes her delicious Chicken Salad and her special brand of Chicken Pastry. (Some of you folks might try to call it Chicken and Dumplings, but it is not the same—she uses strips of pastry and not the doughy dumplings. Nom! Nom!) For one sister-in-law, it’s Chocolate Pie. For another, it’s Grandma Nina’s Pink Congealed Salad. For my hubby, it’s Lemon Pie. She slaves away in that kitchen, and though she is nearly 84 years old (yes, she is pretty amazing!) and we say, “Come on, Mom, take a load off!”, she does not listen. She just keeps cooking. And she does it because she loves to do it. And it makes us feel loved by her.

Yesterday, I started thinking some Chicken Pot Pie sounded awfully tasty. And, Emma loves it too. So today, I gathered the ingredients and went to work. And it is work, but the end result is so worth it.

You should have heard Emma exclaim when I told her we were having Chicken Pot Pie for supper!

It sounded an awful lot like the Hallelujah Chorus.

Oh, so, you want the recipe for this Chicken Pot Pie that is so good that, as we say in the South, It’ll Lock Your Jaws?? Okay, you can have it.

But first, let me say that this recipe is not my own creation. It was originally posted by a woman named Karen Johnson from California on allrecipes.com, where I found it about 3 years ago. Unfortunately, the link in no longer on the website. So, Karen Johnson, whoever and wherever you are, I am trying to give credit where credit is due…You posted one awesome recipe, girl!

This recipe is great for the obvious delicious reasons, but it is also great because it makes TWO pies. Eat one tonight; freeze one for next week or next month. Serve one up for company. Take one to your church potluck or to a family who needs a meal.  Everyone will love it, and it may or may not have anything to do with the cup of butter in there!

4 cups cubed cooked chicken (This works out to about 3 good sized boneless/skinless breasts for me. I cook them in chicken broth with salt and pepper on the stovetop and then shred them instead of cubing, as suggested.)

1 pkg. of pre-made, rolled out, refrigerated pie crust (2 in the pkg.)

1. Place potatoes and carrots in a large saucepan; cover with water. Bring to a boil. Reduce heat; cover and simmer for 8-10 minutes or until crisp-tender. Drain and set aside.

2. In a large skillet, sauté onion in butter until tender. Stir in the flour, salt, thyme, and pepper until blended. Over medium to medium-high heat, stir the mixture and it will start to thicken. Gradually stir in broth and milk. Bring to a boil; cook and stir until thickened..

3. Add the chicken, peas, corn, potatoes, and carrots and combine. Remove from heat.

4. Divide the mixture evenly between the two pie crusts. Roll refrigerated pie crust over the tops of the pies. Seal edges. Here’s where you can make you a fancy looking pie crust! Cut slits or decorative cut-outs in the pastry.

5. Bake one pot pie at 425 degrees F for 35 – 40 minutes or until crust is lightly browned. Let stand for 15 minutes before cutting. Cover and freeze remaining pie for up to 3 months. Or cook both pies at once for about 40 – 45 minutes. Yield 6 slices per pie.

Hope your family will enjoy this yummy deliciousness as much as mine does!

“There is nothing better on a cold wintry day than a properly made pot pie.”  ~Craig Claiborne

Filed under 30 Days of Thankfulness, Family

What we take for granted. Day 2 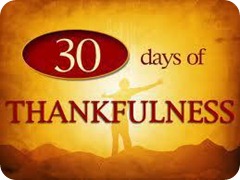 Like the rest of the country, I have been following the news coverage of the devastation left by super storm Sandy up and down the east coast. Having grown up in the land of hurricanes here in the South, these images are not unfamiliar. They are not unfamiliar, but they are always a shock. Mangled homes, beachfronts and roads. Broken hearted people. Cries of “we’ve lost everything.” All are hard to see and hear.

It is so conflicting to sit and watch the news and say, “oh, I am so thankful that we were spared this time.” It did not hit us, but so many were hit. So, to be grateful that we were spared almost feels like I am not honoring the ones who were. My heart hurts for them: the ones who have suffered so much loss in this storm. My prayers go up for them.

In light of those images and real life suffering of those affected by the hurricane, I find myself feeling thankful for the every day things that we take for granted—that is, until we don’t have them so readily.

Clean water. A roof over my head. Electricity. Food. Available gas to put in my car. Heat in my home. A telephone to call my loved ones and see if they are okay. The knowledge that my family is safe. A simple hot cup of tea.

I want to live a life of gratitude, in the good times and the not so good times—and not only during the month of November. I don’t want to be unaffected by suffering of others. Lord, help me not to take things—any things—for granted.

“Praise be to the God and Father of our Lord Jesus Christ, the Father of compassion and the God of all comfort,  who comforts us in all our troubles, so that we can comfort those in any trouble with the comfort we ourselves receive from God.”  2 Corinthians 1:3-4 NIV

Filed under 30 Days of Thankfulness

Amazing the span of emotions a person can experience in one day.  And all because of a little guinea pig.

Yesterday went from the excitement of a short school week and the anticipation of time with family for the Thanksgiving holiday to the agony of making, quite possibly, the most difficult decision I have ever had to make. Don’t worry, I will get to the “thankfuls”, because even in the lowest of valleys, there are always things to be thankful for. Always. 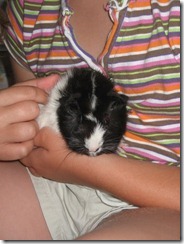 I had a sick guinea pig on my hands as we were preparing to leave town for the Thanksgiving holiday yesterday; that is, Zippy, Emma’s little friend that we got a little over 3 years ago. The thing about guinea pigs is that you don’t know they are really, really sick until they are really, really sick.  Like, on the verge of death sick. This is something I unfortunately learned yesterday. I had noticed, over the last 4 or so days, that he was not his usual energetic self. He was looking quite pitiful. Not eating much. Or drinking much. The little guy who was usually very excitedly greeting  you with his adorable little squeaking noises when you brought him a carrot was barely peeking out of his igloo.  I will spare you all the details, but looking at him, I knew it was bad. So Hubby and I ultimately decided that I should take him to the vet before we left town. Now, you can’t just take guinea pigs to any old vet. So I had to call around to find one that takes care of guinea pigs. As I explained our situation, I proceeded to break down on the phone with the girl at the vet’s office. Have I mentioned that I am a crier?

After she had examined him, the vet informed me that it was indeed very bad. Using words like, grave condition, edge of death, maybe 40% chance, no guarantees, and—you have a decision to make.

A decision. A decision—the likes of which I had never faced before.

Meanwhile, I looked at Zippy, who was struggling to breathe and barely able to hold his head up. His suffering was obvious. I saw the estimate the vet prepared for hospitalizing our precious pet and trying to nurse him, with little hope for recovery. It was steep. I spoke to Clyn on the phone about what we should do. Did I mention we were trying to leave town?

I found myself faced with putting a price tag of the value of our little furry family member. Was his life less valuable than any other? This seemed like some sort of cruel trick. Surreal. One of those, “who gets to stay in the lifeboat” problems.  And we all know, those problems have no right answers. No answers that you feel good about giving.

I felt very, very alone, in spite of the very kind veterinary staff. They couldn’t help me make this terrible choice. I was honestly caught off guard at the strong and uncontrollable emotions I was feeling about this little rodent, about whom I had said only the day before that I wasn’t going to take him to the vet. Yet, there I was. And there he was. And looming between us was life and death. And it was on me.

With Clyn’s agreement, I signed a paper.  The only thing I remember seeing on the paper was “this decision is irreversible.”

“We’ll let you spend some time with him.”

I held him and stroked his little nose like he always liked. I told him he was a good little buddy. I told him to rest easy. They took him away.

Clyn told Emma when he picked her up from school about Zippy. She was so, so sad, but she didn’t say much. She just cried. And cried. And so did I.

I brought him home and Clyn made a little spot for him in the back yard. Our family of four gathered around and we said a few words. Emma made a cross out of some wood in our garage to mark his grave. Then she wrote on it in green sharpie:

I have to tell myself I made the right choice for Zippy. But I still have the nagging guilt of “what else could I have done?” I know it was what needed to be done, but that doesn’t make it feel any better right now.

And yet, God is still God and He is still good and I was not alone in making that awful choice and I am thankful.

Maybe you say, “ he was just a guinea pig, I don’t see what you’re so wrecked about.”

Well, he was our little guinea pig. Our Little Buddy. And we loved him.

Filed under 30 Days of Thankfulness