“We did not change as we grew older; we just became more clearly ourselves.”  ~Lynn Hall 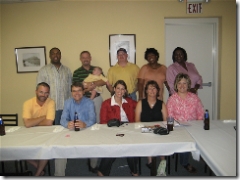 It seems to me that people really don’t change.  And I mean that in a good way.

The “mini-reunion” of the NPHS Class of ’87 was so much fun (even my hubby said so).  Nine classmates were able to attend along with various spouses and children–one more literally stopped in for like 2 minutes.  It was a huge laughfest and I felt like I was back in the lunchroom goofing off with my friends.  It was so great to hear what people are doing, where they are living and what they are currently calling themselves.  Yes,  one of the guys, who we ALL knew as Reed back in the day, now has the audacity to go by his FIRST name, James.  The horror!  I was like, “Buddy that just ain’t working for me….I’m going with Reed, hope you don’t mind.”  I’d like to add that “Reed” nearly caused me to pee my pants several times…I’m not sure if it was his references to his recent tummy tuck, or all his girlfriends, or his invention. OR if it was the fact that all of that was classic Reed and it just warmed me knowing that people really stay true to who they are.  Love ya, buddy!  Some of us have grown children!  YIKES.  Some have babies and toddlers! Double YIKES!  Some of us have lived nomadic lives.  Some have stayed around home.  Some of us drive minivans.  Some of us drive a Rolls (not lying).  But get us all in a room together and we are the same as we ever were in many ways. The more things change, the more they stay the same, right?  Or at least that’s what “they” say.

As for “the fatness”, well, let’s just say that we all were fluffier than we were back in ’87.  Thanks to Kristi for reminding us all of it via the yearbook and scrapbook she brought with her.  Ahhh, the fashions of the 80s…big hair, mullets (I am on the mullet wall of shame myself and NO, I don’t have a picture) and all around bad clothing choices.  You’ve gotta love it.  And you’ve gotta love even MORE the fact that they are all back in style…with the exception, thank GOD, of the mullet.  Which should NEVER be resurrected!  Am I right, people??

A bigger shindig is being put together for later in December, so hopefully we can get a bigger turnout.  There were some “take charge” kinda gals there and I’m thinking they are on top of it. 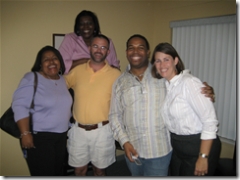 Filed under Back in the Day, Humor

Tagged as back in the day, friends, Humor, reunion